Northside Partnership CEO, Paul Rogers, joined the country’s other 48 Local Development Companies (LDCs) to call for an extra €19 million per year for the rural development programme, LEADER, and the restoration of social inclusion spending under the SICAP programme to pre-financial crash levels. The calls were made in the Budget 2023 submission to Government by the Irish Local Development Network (ILDN) which is the representative body for the 49 LDCs around the country.

“We fully support the call for the restoration of the Social Inclusion and Community Activation Programme funding to pre 2008 levels and call for a radical reform of labour market schemes such as Community Employment and Tús,” said Mr. Rogers. “These schemes were devised at a time when unemployment levels were considerably higher and long term unemployment was having a detrimental impact on individuals, families and communities. Today, long term unemployment is at an all-time low and many community organisations, that are dependent upon CE and Tús to provide essential supports and services, are struggling to recruit CE and Tús participants for essential roles. We call for a complete review of both schemes and a shift away from the Labour Market activation focus, which was their initial purpose, to a Social Inclusion focus that will provide opportunities for a much wider cohort of people to contribute to their communities while also promoting personal development, health and wellbeing and social cohesion.” 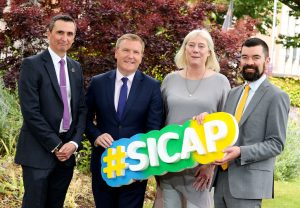 ILDN Chairperson, Jim Finn, explained that SICAP funding is now at approximately half the level it was at in 2008 despite the fact that programme has recently won a UN Public Service Award.

“The purpose of SICAP is to reduce poverty and promote social inclusion through community development, pre-employment and social enterprise supports. Despite the fact that the programme’s target groups are experiencing intense food and fuel poverty – due to rapidly rising prices – and finding great difficulty in securing affordable homes, the current budget level for the programme is approximately half of the €85 million level in 2008.

“The budget for SICAP needs to reflect a sense of real urgency in addressing the various crises affecting those excluded from the mainstream and that is why we want to see Budget 2023 take the first significant step towards restoring the SICAP budget to pre-crash levels.”

Jim Finn said that budget for the EU LEADER programme – which supports local development in rural areas – has fallen from €55 million per year to €36 million per year for the period 2023 to 2027.

“This represents a significant shortfall on the average budget over the previous LEADER programme. This reduced income for the programme will lead to reduced funding for community infrastructure and enterprise development in rural areas – at a time of severe pressure on the rural economy due to the impact of fuel inflation – and will lead to staff lay-offs by Local Development Companies too.